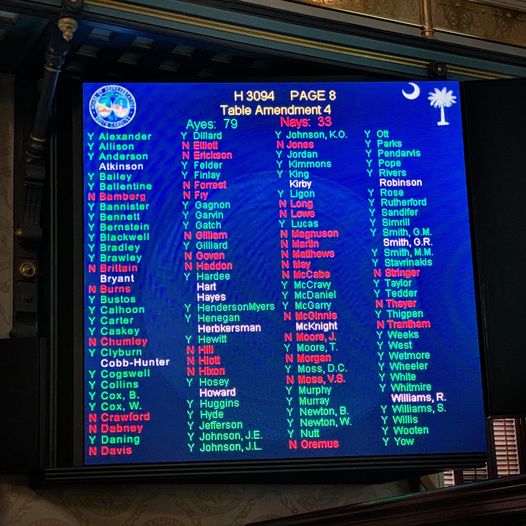 Yesterday, a vote concerning an Amendment No. 4 to Constitutional Carry was shut down by South Carolina Republican Legislators.

House Representative Jonathan Hill, who has been a strong voice for Constitutional Carry in South Carolina and had filed many bills to this fact, filed Amendment No. 4 to be added to Rep. Bobby Cox’s Constitutional Carry Bill that passed House Judiciary Committee yesterday, H3096. This bill could get a vote on April 7th. But many believe this vote will be held after the April 10 cross over deadline to push it out even further.

Many South Carolinian’s have voiced their desire for this State to recognize the U.S. Constitutions 2nd Amendment Rights, for an individual to bear arms. South Carolina is one of 5 States that still does not have Open Carry, including California, Florida, Illinois and New York.

The Republican Party is very well known throughout the country for pushing Constitutional Protections for firearms owners. So, why did the majority of them vote to table this add on to a Constitutional Carry Bill? Rep. Hill posted yesterday on his Facebook account pertaining to this vote.

The subject of Constitutional Carry/Open Carry in South Carolina has been a heated debate for many years. At the vote for Rep. Cox’s bill several legislators spoke out against it, including House Representative Jermaine Johnson of Hopkins.

Representative Johnson took a strong stance against Open Carry by stating, “This bill as it stands will be no more than legalized hunting for Black people.” Johnson urged legislators to see this issue in a racial aspect.

Democratic state Rep. Jermaine Johnson of Hopkins said open carry is a privilege for white people, but dangerous for a Black man like him — a former college basketball player who is 6-foot-7 and has tattoos.

Many have stated that Open Carry is a two edged sword, as it loosens control of who may carry a firearm and tightens the hands of law enforcement officers when it comes to violent crimes involving firearms.

Many States that have passed Constitutional Carry Laws have seen a decrease in Gun Violence. Some have seen small decreases while others have seen large decreases in criminal violence. What is South Carolina’s future in the matter of 2nd Amendment Protections?